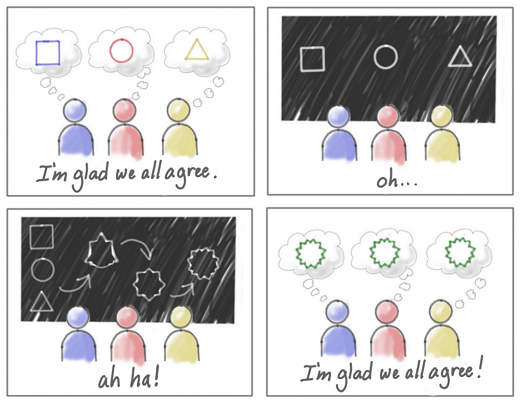 Developing software products is a messy process. It’s messy because it’s so flexible and fairly new, only about 60 years old. It’s also abstract and not limited by the physical world, only by our creativity.

If you’re building with more concrete mediums, whether it’s furniture or a cake, there are well-documented rules about how parts work together and how it should look. In this sense, software engineers more closely resemble artists such as writers or musicians where rules are flexible and the result isn’t how it looks, but how it makes us feel. Great technology delights - think of the raw excitement the first time Steve Jobs presented the iPhone in 2007. Or the sheer joy of finishing tedious paperwork in minutes instead of hours because a computer automated it.

But, building delightful products is a process littered with worries. Work experience can help because it closes the gap between the execution required and final product vision. Unfortunately, experience is a nice way of saying learning from mistakes and there are always new ways to make mistakes. Experience isn't always enough.

So, what are my worries?

I just attended the 2019 Toronto Machine Learning Summit (TMLS) last week - it was a great experience.The community was welcoming,the content was relevant, and it was well organized.

One thing that I appreciated about the event is how down-to-earth it felt. Many conversations started with the person that I sat beside during a session, which doesn't happen often at conferences. People had a range of experience with Machine Learning, but everyone came from a genuine place to learn more about the topic. It's quite different from other conferences that I've attended where the marketing glamour is cranked up - leading to a mass-produced approach, hit-or-miss content, and participants feeling more distant.

I read all 22 Amazon Shareholder letters.

I wanted to understand how Amazon used machine learning to drive the customer experience. Here's what I learned.

Jeff Bezos has been consistent about Amazon's goal since the beginning - deliver an amazing customer experience. That means providing vast selection, fast convenience, and price reductions. Amazon has invested in building massive platforms, whether it's fulfillment or cloud computing centers, to support the pillars of selection and convenience. The last pillar, price reductions, is a result of the efficiencies from scaling.

Well, this is new.

Retailers have blamed bad weather for poor sales before, but I don't think I've ever seen a retailer blame bad algorithms.

Loblaw Companies Ltd, Canada's largest grocery and pharmacy chain, which owns the mainstream brand Loblaws and discount brand No Frills, had a soft Q2 performance with same-store revenue growing 0.6%. Their President, Sarah Davis, blamed the performance on algorithms that prioritized increasing profit margins instead of promotional pricing to attract foot traffic. That is, Loblaw chose to increase the revenue from each customer instead of focusing on increasing the number of customers. She says:

After attending the Toronto Machine Learning Micro-Summit this past week, one theme came up repeatedly during the presentations -  communicate with the business team early, and often, or you'll need to go back and re-do your work.

There was the story of an insurance company that created a model that recommended whether to replace or fix a car after a damage claim. It sounded great - the Data Scientists got a prototype up and running and had business team buy-in. But, the problem was that their models weren't very accurate. Usually when that happens it means that your data is noisy or the algorithm isn't powerful enough. They went back to their business team and it turns out that they missed 2 key features: the age of the vehicle and if it's a luxury model.

Another example was a telecom that built a model to optimize call center efficiency. The data science team spent a month building the model and everyone was excited to get it in production. Then, they were told that the call center runs on an outdated application. It turns out that integrating with the application would cost more than the ROI of the project.

There was of course no way of knowing whether you were being watched at any given moment. How often, or on what system, the Thought Police plugged in on any individual wire was guesswork. It was even conceivable that they watched everybody all the time. But at any rate they could plug in your wire whenever they wanted to. You had to live—did live, from habit that became instinct—in the assumption that every sound you made was overheard, and, except in darkness, every movement scrutinized. -1984, George Orwell

Last summer I had a conversation with an acquaintance who had recently visited China. There was discussion about China's Social Credit System (SCS) and its impact on people's daily lives. The Social Credit System is a system that assigns scores to citizens based on their reputation, and that score can impact someone's ability to be outside in the evening, their eligibility to book a travel ticket or their suitability for a loan. It's similar to a Credit Score that North Americans are more familiar with but more encompassing as the SCS takes non-financial data into account. My acquaintance said that the initial feedback was positive - her friends and family felt safer walking the streets at night knowing that people deemed dangerous wouldn't be allowed outside.

I recently completed a Statistics for Data Science course at the University of Toronto for Continuing Studies and I wanted to share my reflections about the experience.

Overall, the course was mostly interesting, some parts boring, and always challenging.

I should begin with admitting that I managed to avoid any heavy maths or statistics classes in university even though I completed science and business degrees. I certainly felt behind when math notations and equations started popping up in class. But, where there's a will, there's a way (mostly).

Most lectures were challenging to follow because of the pace of learning. I even tried to read ahead for some lectures to be more prepared, but that only marginally helped. As a result, I often sat in class with material that was way over my head and questioning if it was the best use of my time to spend that weekday night on campus, rather than at home self-studying. A younger me might of panicked and wondered what I had gotten myself into or worried that I would be outed as a fake. And I don't think I was the only one as I saw classmates drop out in the initial few weeks.

I was recently asked whether studying Data Science has helped me in my day-to-day job. My response was yes, but not in an obvious way - it's resulted in better designed customer solutions by improving my empathy.

Let me take a step back. For the past few years, I've been leading Software-as-a-Service (SaaS) platform integrations for enterprise clients. I often describe the work as similar to being a clothing tailor. If a software consultancy is a bespoke tailor that customizes every detail at a premium price; than, a SaaS platform is a made-to-measure tailor who cuts from an existing pattern at an economical price. Over time, I've learned how to measure and cut software for customers of all shapes, sizes, and sophistication.

The first time I encountered the potential application of machine learning was a project where I was helping a company protect itself from competitors infringing on their trademark. One key component of trademark infringement is whether there is the likelihood of confusion by a consumer. High-profile examples include Apple suing Samsung for copying their minimalist smartphone designs, or Tiffany & Co. suing Costco for selling Tiffany-inspired jewelry.

The rise of social networks means consumers are generating tremendous amount of content about brands. My project involved writing a prototype software program to analyze online user comments that mentioned two competing brands, then determine if the user was identifying the product with the wrong brand. An example could be someone sharing a photo of a Captain Morgan rum bottle and calling it by their competitor's name, Admiral Nelson.* The goal was to run a daily scan and gather examples as evidence of brand confusion over time. The field of analyzing human text using computers is a form of machine learning called Natural Language Processing (NLP).

In a world where physical goods are easily copied, the only competitive advantage left is your reputation.

Back in college, I had a summer job completing research for a clinical health professor. She was a leading expert in diagnosing and treating open human wounds. My job was to survey other experts, get them to examine photos of open wounds, and then recommend a treatment.

A few months ago, I discovered a smartphone app which replaces this work.* You take a photo of an open wound and upload it to the cloud. I suspect that the photo is run through an image recognition model, called a Convolutional Neural Network (CNN), that identifies specific features of the wound for treatment. Current machine learning is very good at completing narrowly defined tasks, such as analyzing a specific type of medical image, because they have millions of previous examples to train from. It is not good at handling non-standard cases.

I work in advertising at a telecommunications company. I'm interested in how artificial intelligence impacts our daily lives. Connect with me on LinkedIn
Browse the Archive »